Traverse all 8 rooms of the Lich King's fortress and defeat his undead hordes from the comfort of your six cylinder, all wheel drive SUV.

NOTE: The game has been updated post submission to fix a bug preventing some enemies and items from being interacted with, and a bug that soft locked the game when driving through an exit door in reverse.

Art and code by never_k

This game is extremely fun and adorable. I love it.

Slight bug report: I backed into the doorway on level 3 and found myself in level 4 unable to move at all. I think it retained my reverse momentum and my only movement options would have been in the wall.

That's def a bug. Thanks for the report!

I also experienced the issue someone brought up of having to run over gems twice--except for me it seems to happen with everything. Sometimes it seems to happen to skeletons too, for no reason that seems to be explained/intentional, and some skeletons seem to just be inactive when they're first activated.

It is fun though!

Thanks for the bug report! I've pushed a fixed version.

Now this is just good clean fun! Can't get enough of plowing through skeletons.

Oh my god dude, this rules. I absolutely adore the art style, it was so cool when I realized that was a 3D model. Music is perfect to. The car driving system is genius. I love how much there is to learn about it, the way that you get into situations where you can't slow down for a wall or corner, or you have to throw it in reverse. The speed carrying through to the next level was also a nice touch. Would be good to get some juice like sounds + burnout particles.

Had a weird bug on one of my playthroughs where I had to knock over the same gem twice, and the doorway didn't open immediately after either (despite it being the last gem). It opened while offscreen.

Simple, novel idea, and fun! The music is catchy and the sound effects make running over those boners a joy! Love this one 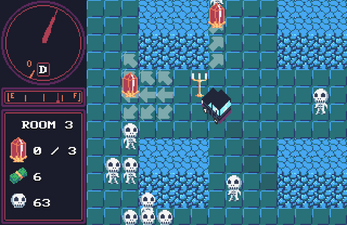 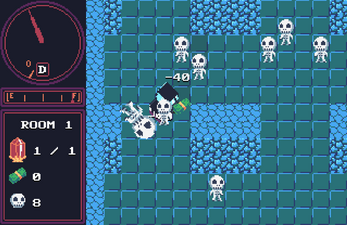